There may be a Shiba Inu (SHIB) rally coming soon.

Recent events have sparked widespread interest in the Shiba Inu project and its native cryptocurrency. On Thursday, the company’s founder and chief programmer, Shytoshi Kusama, informed the SHIB Army that the company’s development team is working on a burn mechanism that will have implications for the entire Shiba Inu ecosystem.

SHIB holders can’t help but be giddy about the future, what with the community’s official Twitter account teasing yet another major update.

A lot has happened since the Australian release of Shiba Eternity. All of this excitement and eagerness is only heightened by the latest statement made by the official account tweet.

Thank you to all the wonderful #SHIBARMY listeners, participants, and those who asked questions.

According to the announcement, Shiba Eternity will launch on October 1. The Shiba Inu Community will celebrate the release as “Download Day” while simultaneously breaking the Android and iOS App Stores.

There was consequently a lot of excitement about the coin and the overall ecosystem.

There is additional good news for the ecosystem. As of this writing, the development team is still putting the last touches to Shibarium, the upcoming update that is anticipated to debut on or about September 30.

Supposedly, this upgrade will provide scalability to the Shiba Inu ecosystem and cut gas expenses for everyone, particularly on the gaming side.

Will this, however, be sufficient for the coin to rally?

Currently, the coin’s value is between $0.000000957 and $0.00001230. This indicates that the currency is trading within its June price range, which is a less favorable period for cryptocurrencies. 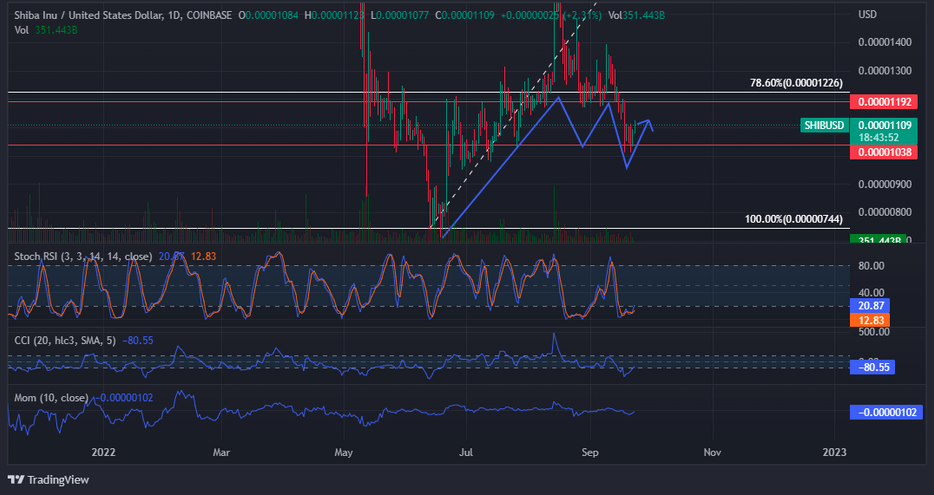 This decline in price, which followed a progressive climb from June to August, is the result of larger market factors.

The recent 0.75 percent increase in interest rates and the news of worsening year-over-year inflation caused investors and traders to feel dread. The price decreased by a stunning 25.06 percent from its latest peak on September 10.

SHIB Seen Rising To The Occasion

Nevertheless, it has risen to the $0.00001038 price range from its bottom on September 21. This range of prices will support the token’s expected relief rally.

The last decline at $0.00001192 represents the resistance. This level is critical since bulls can easily exploit any breakthroughs towards the 78.60 Fib level.

Due to the fact that the SHIB token is based on Ethereum, its value might be affected by the Ethereum ecosystem. The current market conditions can magnify the coin’s volatility that may lead to a crash.

If the larger financial markets rebound from the decline on September 13, we can anticipate SHIB to ride the tide of recovery.

Related Reading: What Ethereum Can Bring On The Table For ETH Investors In Q4