Catch the latest episodes of CoinDesk TV for insightful interviews with crypto industry leaders and analysis. And sign up for First Mover,our daily newsletter putting the latest moves in crypto markets in context.

The largest cryptocurrency by market capitalization was recently trading at about $19,350, up about 5% over the past 24 hours. BTC dipped below $18,400 late Wednesday afternoon (UTC), its lowest level since early June, following the Fed’s 75 basis point increase, but crypto investors started to return in Thursday’s early hours.

Ether was recently changing hands at about $1,330, a 7% gain from the previous day when it dropped below $1,250 for the first time since July. The second largest crypto in market value has declined in recent days amid wider economic concerns and a post Merge hangover. The Merge is the technological overhaul of the Ethereum blockchain to a more energy efficient proof-of-stake protocol.

Other cryptos followed a similar path, beginning their rallies from the previous day’s carnage early Thursday and spending most of the day in the green. XRP and CHZ recently jumped more than 20% and 16%, respectively. ALGO rose over 11%.

Equity markets veered in a different direction from crypto prices for one of the few times in recent months with the tech-focused Nasdaq off more than 1% and the S&P 500 and Dow Jones Industrial Average (DJIA) both down a few fractions of a point. The declines came amid ongoing inflationary fretfulness that have prompted several central banks to raise their interest rates and protect their currencies.

“The markets are not done de-risking,” Mark Connors, head researcher at Canadian digital asset firm 3iQ, told CoinDesk. “The Fed will not change stance any time soon, and we are very close to posting a third consecutive down quarter in U.S. GDP.”

Connors added: “People are realizing this is not going to be a short-term pivot, that growth is slowing and the Feds are not done hiking.”

On Thursday, the Bank of England boosted its interest rate for a seventh straight time, and the banks of Switzerland and Norway also announced rate hikes. The BOE’s second consecutive hefty half-percentage point increase sent its rate to 2.25% as the country aims to combat surging prices for energy and household goods. Japan’s historically dovish central bank has left rates low, but the government has begun to purchase yen to prop up the yen’s price.

In the ongoing saga of Celsius Network, the beleaguered crypto lender now appears to be considering a plan to turn its debt into crypto “IOU” (“I Owe You”) tokens, CoinDesk’s Cheyenne Ligon reported. And the Commodity Futures Trading Commission issued an order filing and settling charges against blockchain software protocol bZeroX and its founders, the CFTC announced in a press release Thursday. The order penalizes the protocol and its founders Tom Bean and Kyle Kistner $250,000 for offering illegal, off-exchange trading of digital assets and other violations.

Despite the current turmoil in crypto markets, 3iQ’s Mark Connors believes that barring unforeseen events, bitcoin will outpace traditional assets in the months ahead forming what he described as “a nice band around $19,000 to $20,000.”

“As we absorb [a] higher rate environment, lower growth environment, I think Bitcoin and Etherium will hold value while the market retreats,” he said.

There are no losers in CoinDesk 20 today.

In the prelapsarian days of 2021’s bull market, Alex Mashinsky, the CEO of Celsius Network, said the 8.8% yield paid on stablecoin deposits was “the true value of the dollar.”

Fast forward to September 2022. Celsius has filed for bankruptcy protection, and some of the surviving decentralized finance (DeFi) lending protocols have less yield than bonds – and even savings accounts.

According to DeFiPrime, the average yield one can expect for lending USDC via DeFi protocols is 0.98%. 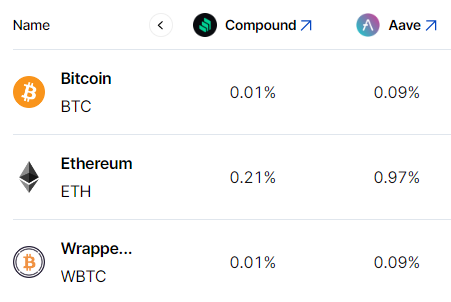 In contrast, the current one-year Treasury bond is paying 4.08%, up almost a full percentage point from early August – and its highest level since 2007 – as the Federal Reserve makes historical moves to control inflation..

The story here is in utilization rate, a measure of how much of the available supply of capital is being used by borrowers.

Across all protocols and assets, it’s at near-historical lows. 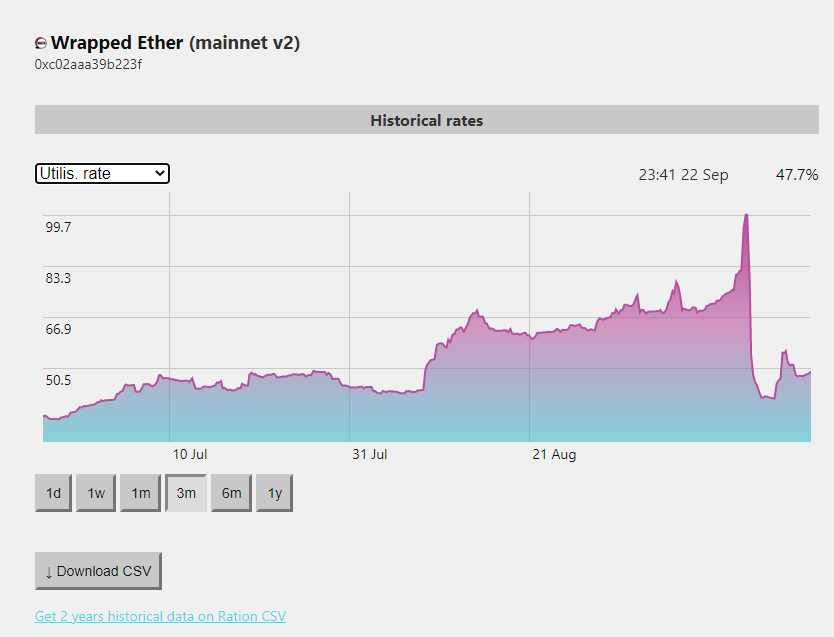 While utilization has dropped to 47%, higher than USDC, it still is lower than the pre-Ethereum Merge rate of around 63% from a month ago. Interest rates for borrowers are back at around 2.7%.

Of course, all this isn’t to say you can’t chase yield with tokens. There’s just not as much of it available.

But these are blue chip borrowers like Alamada Research, Amber Group and Wintermute. Of course, for new loans there’s just not the return there once was: Rates are now between 7.5% and 11%, compared with the 15% available last year. Rates lower when that loan is denominated in ether.

CeFi lending comes with its risks, though, as CoinDesk documents here in its learn section.

The Fed’s quest to control inflation with higher interest rates means there are many savings accounts that offer over 2% interest to depositors – more than what some DeFi protocols are paying for USDC and ether.

As an added bonus, they come with FDIC insurance.

Coin Bureau on Crypto Market: ‘This Winter Is Going To Suck’

Taking The Orange Pill Is Only The First Step. It’s Just As Important To Teach People About Bitcoin